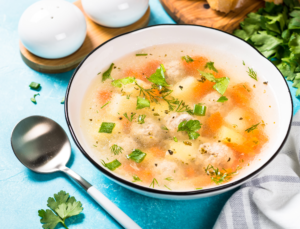 The question of whether soup is meant to be consumed by swallowing or slurping has been the subject of heated debate among chefs for as long as there have been soups and as many different soup recipes. In certain cultures, soup is eaten out of bowls with cutlery.

In other regions, people slurp and sip soup from mugs, bowls, and teacups. So the question of whether to consume soup via drinking or eating arises. We’ve decided if your soup is drinkable or not.

Soup is good to eat or drink. Nonetheless, this is conditional on the soup’s thickness, the best crockery to use, and the soup’s country of origin.

Everything you wanted to know about making and enjoying soup is covered here. In addition, we’ve included some suggestions for complementing your soup. This article contains all the information you could ever want about consuming soup in any form.

Do You Drink or Eat Soup?

Soup can be both a meal and a beverage. If you use utensils, you’re eating your soup, but if you just put your mouth to the bowl, you’re sipping it. When you use utensils like a spoon, fork, or chopsticks to remove chunks of soup for chewing, you are eating the soup.

You can eat the solid components with your flatware and suck the liquid from the bowl to combine eating and drinking in one sitting. There are various determinants of how often and how much we eat and drink soup. A few of these are:

1. The Consistency of The Soup

Clear and light soups are frequently produced without any added solids. They are cooked in liquid and flavoured with spices and sauces. Examples include broth, bouillon, and consommé.

This soup is typically consumed by slurping or drinking due to its lack of substantial ingredients like vegetables or protein. But chunky and thick soups are made with more substantial components like meatballs, cheese cubes, silken tofu, and a wide variety of vegetables (potatoes, carrots, chilli peppers, lettuce, cabbage, and the like).

The combination of these ingredients creates a soup that is too thick to easily sip or slurp. You’ll need to use your flatware to pick up pieces and chew them. Some examples of hearty soups are purees, soups made with potatoes or mushrooms, bean soups, chicken miso soup, and gumbo. 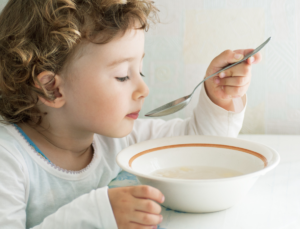 2. The Kind of Dinnerware And Flatware Used in Serving

Soup can either be eaten or drunk, depending on the dish in which it is served. The soup’s thickness and serving size also typically dictate the cutlery and crockery selection. If you’re offered a bowl of soup alongside cutlery, it’s assumed that you intend to eat it.

On the other hand, if the soup is given in a bowl or mug without any cutlery, you will have to drink it or slurp it. Clear soups are often served in mugs or teacups instead of bowls so that they can be sipped without getting soup all over the person drinking them.

3. Origin of The Soup Meal

Another factor in deciding whether a soup is meant to be eaten or drunk is its country of origin. For instance, the Chinese are known for consuming soups through sipping rather than eating. Soup is typically given at Chinese dinners instead of tea or water.

Some of the world’s heartiest soups may be found in Italy and Portugal. In these regions, soup is more commonly consumed as a meal than a drink.

4. The Side Dish of The Soup

Even though the soup is thin enough to be sipped, it is typically eaten rather than sipped in a culture like West Africa where swallow dishes are the norm. Some people use silverware to eat the swallows, but most just scoop them up with the soup and eat them with their hands.

A few instances of swallow lunches are pounded yam served with egusi soup and konkonte served with groundnut soup.

When Should I Drink or Eat Soup?

Consider the criteria we discussed before if you are unsure whether you can eat or drink your soup. Depending on the thickness of the soup, different types of plates and bowls are used.

When it comes to serving potato soup, for example, a mug isn’t the greatest solution because of the inevitable mess that will be made when slurping or sipping the soup from a mug or bowl due to the potato soup’s chunky consistency.

Furthermore, the dish’s history can provide clues as to whether it’s best eaten or drunk. To try authentic Chinese food, for instance, you could take a vacation to China. Taking a sip of the soup you’re served as a tourist in China is a gesture of respect for the local culture and a hint that you’re eager to join in with local activities.

Tips For Enjoying Your Soup

Here are some tips to improve your soup dining experience:

The success of a soup dish depends not only on the quality of the components and their proportions, but also on the presentation.

In order to help you decide whether to eat or drink your next soup delicacy, we have supplied some things to think about.

Continue reading: Why Is My Soup Foaming? (All You Need to Know)