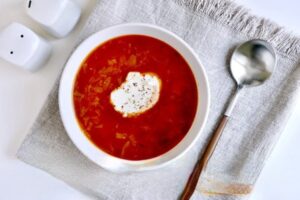 Staying hydrated throughout the day is crucial to maintaining good health, since your body relies on water and other liquid nutrients to carry out its everyday functions, and depriving it of these can have serious consequences.

If soup is one of your go-to meals but you’ve ever wondered if it provides any hydration benefits, I’ll fill you in.

Yes! Soups are great for staying hydrated because they typically contain 90 percent or more water as their major ingredient. Since soups are predominantly liquid and contain only a small amount of solid ingredients (often veggies), they provide a wealth of hydration and nutrients.

Maintaining sufficient hydration is essential for the smooth operation of every system in the body, from the lubrication of joints to the suppression of infection to the control of temperature.

Let’s find out more about how nourishing soups, in addition to water, can be used to keep you hydrated, as opposed to only water. 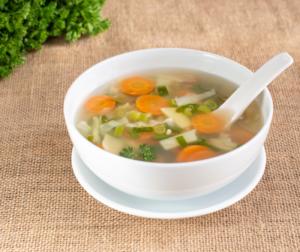 Does Soup Really Hydrate You?

It is impossible to overstate the therapeutic value of curling up with a hot bowl of soup and a nice book in front of a fire on a cold winter night.

Some people only eat soup when they are sick, but soup is great for more than just getting over a cold or the flu or warming you up after a long day.

Soups, which are notoriously filling, quick to prepare, and hydrating, are an excellent dinner option that should be consumed frequently. The water content of a cup of soup accounts for nearly all of its weight.

Ingesting a cup of soup can quickly restore your body’s water and electrolyte balance if you’ve been dehydrated.

What Soups Are Good For Hydration?

We’ve already reassured you that soup is a fantastic way to stay hydrated, but it’s crucial that we specify which kinds of soup are particularly good at doing that.

For this reason, we have compiled a list of several soups that are sure to hydrate your body when consumed, as opposed to those soups that may be thick and creamy and leave you thirsty instead of hydrated. 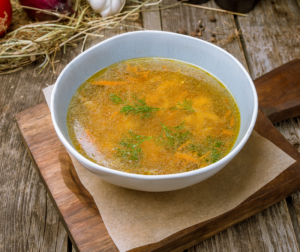 What Other Foods Hydrate You?

Although soups are a quick and delicious method to replenish your body’s fluids, there are other options to consider if you’re not in the mood to make a pot of soup or it’s really hot outside and you’d rather have something more refreshing.

Here are some fantastic alternatives to consider.

Which Foods Should You Avoid When Dehydrated?

While there are foods you should eat while dehydrated in order to rehydrate, there are other foods and beverages you should avoid as they will make your condition even worse.

You’ll find a few examples of these foods mentioned below;

Is soup good for dehydration?

Because it contains so much water and is so much easier to digest than solid foods, soup is an excellent remedy for dehydration.

Does broth count as water intake?

Broths are mostly water, therefore they are an excellent source of the fluids your body needs.

Which soup is best for dehydration?

Broth-based soups, like chicken broth or chicken noodle soup, are ideal for rehydrating after sweating a lot. This is due to its high nutrient density, ease of digestion, ability to restore depleted electrolytes, and rapid revitalization effects.

When you’re cold and miserable outside, the last thing you want to do is turn down a nice bowl of soup.

However, you shouldn’t just eat soup when you’re feeling under the weather; instead, aim to have it at least twice or three times a week as part of a well-rounded diet.

Soups, as we’ve seen, may be a source of hydration when your body needs more water contents, and health soups are packed with protein and other nutrients, giving you an added benefit in addition to the soothing effects.

If you want to know for sure that you’re making the right choices, just remember the advice we’ve given above.