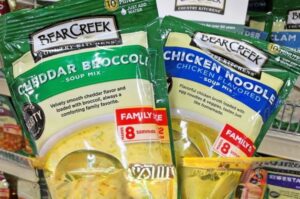 Even though handmade soups are always the most fulfilling soups because they are created fresh and of course with a sprinkling of love, not everyone likes to make their soups from scratch every day due to hectic schedules and a few soup recipes that could have flopped a couple of times.

Therefore, it is no surprise that handmade soup products like bear creek soup are so popular, albeit if you have a gluten sensitivity or are following a gluten-free diet, you should check the label to be sure.

Despite claims to the contrary, the most majority of bear creek soups have been found to contain gluten. However, bear creek soup variations without gluten have recently been made available for purchase, making it suitable for folks who either have an allergy to gluten or simply prefer to avoid it.

Many people are fans of Bear Creek Soups because of the special recipes that give each variety of soup an authentic, homemade flavour.

To everyone’s delight, many manufactured foods now have a flavour that’s more reminiscent of homemade cooking. However, given the past prevalence of soup flavours containing gluten, it is important to establish whether or not bear creek soup may be safely consumed by those who are gluten-intolerant or following a gluten-free diet.

Established in 1991 in a remote Utah village in the Wasatch Mountains, Bear Creek Country Kitchens is a well-known Utah institution.

They quickly became well-known for their one-of-a-kind homemade recipes and became a hit at boutique fairs where they sold their dry soup mixes in a variety of flavours and their “just add water” creamy potato and cheddar broccoli soups.

As word of these incredible tasting dry soup combinations spread, retailers took an interest in carrying and distributing them.

With this, they entered the retail market as a brand, and they’ve kept building on that success by creating new, delicious recipes from scratch. 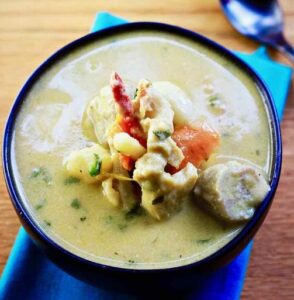 Restaurants and manufacturers rely heavily on soup thickeners that contain gluten, making it difficult to locate a gluten-free soup whether eating out or shopping for processed dry soup mixes.

When eating out with a friend or loved one, it can be challenging to find a soup that is safe for a person on a gluten-free diet. This is also true with processed dry soup mixes.

Could the same be said for bear creek soup? Okay, then, let’s find out. Gluten elements like wheat flour were used by bear creek country kitchens to thicken their dry soup mixes. However, as time progressed, they developed a plan to switch out the gluten thickening ingredients with those that did not contain gluten.

Currently, there are 14 different bear creek dry soup mixture tastes available, and 9 of those varieties have been remanufactured to be gluten-free and acceptable for consumption by anyone with gluten allergies or who are following a gluten-free diet.

Thickeners such maize starch and others that don’t contain gluten have replaced wheat flour, which was previously utilised.

Which Flavors Of Bear Creek Soup Are Gluten-Free?

How do you make bear creek potato soup?

For Bear Creek Potato Soup, just bring 8 cups of water to a boil, pour it over the soup mix while whisking, and then let the mixture simmer on low heat, stirring occasionally, for 15 minutes.

What kind of soups does bear creek have?

What is the shelf life of bear creek soup mix?

Bear creek soup mix has an optimal shelf life of 18-24 months if stored in the refrigerator. If you have opened it, you should reseal it properly to extend its shelf life.

There’s nothing better than relaxing with a steaming bowl of soup that you made yourself with nothing more than a pot of boiling water and a few extra ingredients.

Because of how much time and effort they save, many individuals have taken up the practise of buying dried soup combinations from various brands on the market.

Our primary worry with Bear Creek Soup Mixes is whether or not they contain gluten; thanks to the data presented here, we know that nine of the brand’s fourteen varieties of dry soup mix are gluten-free.