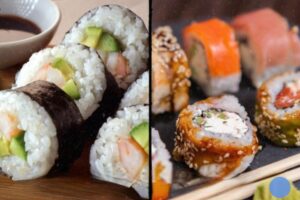 Many people have trouble telling kimbap and sushi apart because of their similarity. Sushi and kimbap are two foods that are highly common in Asian restaurants, despite the fact that they differ in many ways.

People outside of the Asian culture, however, are assumed to be unable to recognise the difference between these fantastic foods. Some may even refer to kimbap as Korean sushi, however this may be incorrect given its distinct taste and flavour.

The primary distinction between kimbap and sushi is that sushi is often made with raw fish, but kimbap is made with precooked seafood or beef, eggs, and veggies. These two dinners have a lot more distinguishing characteristics.

Sushi is a typical Japanese cuisine because it originated in Japan hundreds of years ago. Kimbap, on the other hand, is a traditional Korean dish. Both dishes, however, have won the hearts of many people around the world.

All the information you require to know the distinctions between kimbap and sushi are included in this article. And now, without any more preambles, let’s dive in. 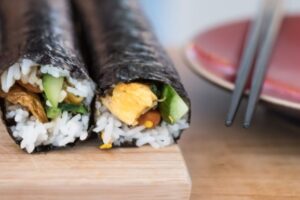 All You Need To Know About Kimbap

Kimbap, a staple of Korean cuisine, is a roll of rice, protein (often fish, pig, egg, or crab meat), and veggies. The sweet and sour taste comes from the cooked or precooked ingredients and the sesame oil.

Kimbap can be kept for a longer period of time than its raw counterpart because its fillings are cooked. Keep in mind that sesame oil is crucial to the flavour and texture of kimbap. Even though kimbap may have been inspired by sushi from Japan, it is clearly its own unique thing.

Some Koreans, out of concern for their health, prefer to use brown rice when making kimbap, though white rice and black rice are also acceptable. This dish is a staple in many households and is highly regarded as a traditional meal in Korea, making it an excellent option for lunch.

It can be quickly whipped up at home, but you can also buy it in local restaurants and grocery stores.

All You Need To Know About Sushi

The sour flavour and raw seafood fillings of Japanese sushi make it a fan favourite. Short grain rice and dried seaweed sheets are additional components. Making sushi is considered an art form by many sushi chefs since it requires a great deal of practise to perfect.

Sushi is more of a celebratory or special occasion dish than a daily staple. Since raw seafood is typically used in the preparation of sushi, eating it as soon as possible after it has been made is crucial.

Hard as it may be, perfecting rice is worth the effort since it makes a huge difference in the final product. Therefore, sushi may be manufactured or prepared at home if you have the necessary components and kitchen equipment.

Differences Between Kimbap And Sushi

Kimbap and sushi share many visual cues due to their shared use of short grain rice and dried seaweed sheets in their respective preparation processes. These two essentials, along with the filler, make neither of them whole.

While both sushi and kimbap are considered light meals, there are significant variations between the two. Thanks to the recent discussions, you now have a good grasp on the distinctions between kimbap and sushi.

The distinctions between sushi and kimbap are highlighted in the following table for a more in-depth look.

Though they share some visual characteristics, kimbap and sushi are actually quite distinct culinary experiences.

How Long Can Fried Fish Stay Out?